Tioman's Dragon Horns have been enticing rock climbers since 2002, the year Nenek Semukut, as the twin peaks known locally, was conquered for the first time. Since then, the peaks have been scaled by a only a handful of expeditions.

The Dragon awaits its next expedition

It's this elusive nature, the unpredictable weather conditions, not to mention the Dragon's inherent difficulty level, that makes the it such a perennial temptation amongst the rock climbing fraternity. Few hopefuls, however, will ever get to set foot on this mighty peak.

But Tioman's rock climbing isn't just the realm of advanced rock climbers. You'll find one or two local rock climbing instructors in the villages keen to take rock climbing novices under their wings. In fact, there are quite a few sites in Tioman that are ideal to learn the rock climbing ropes, so to speak, including at the base of the very twin peaks. So if you're keen to try rock-climbing classes, let us know with below form.

The sheer wall is a worthy adversary

With such a challenging flagship rockwall site in Tioman's midst, it's no wonder that international rock climbing competitions and a number of women's record-breaking events have been hosted here in Tioman recently.

But if you're a hard-core advanced rock climber and you're keen to take on the Dragon's challenge, then you're in luck. Simply use the form below to let us know your target dates and number of rock climbers. We'll set you up with a Dragon's Horn's alumnus with more hours on its slopes than any rock climber anywhere. You'll be in expert hands. 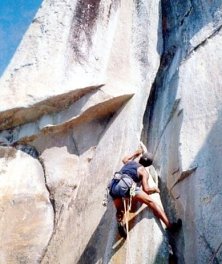 After fog, rain and lightning, the final test

Our once-in-a-lifetime Dragon Horns Experience is offered as a 3D/2N package that includes guides, porters, accommodation, food and drink, all climbing equipment, as well as the ferry transfers between Tioman and the Malaysia mainland.