The Turtle Sanctuary is a project set up by determined volunteers to protect the various endangered species of turtles and their eggs from predators, including man.

In the 1960's and 1970's turtles were found everywhere in the Seri Buat Archipelago. The Tioman waters, especially, were teeming with healthy populations of turtles, in particular the leatherback turtle.

This turtle will be released shortly

But it wasn't long before the seas around Tioman were subjected to overfishing, illegal fishing and the poaching of eggs. In fact, at one point turtles were about to become extinct.

However, thanks to the efforts of numerous turtle sanctuaries around the area, set up with the help of the Malaysian Fisheries Department, turtles are now staging a comeback.

If you'd like to have a look at the Turtle Sanctuary in Tioman, take a hike across the island to Juara. 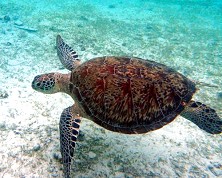 Turtles have few natural enemies,
but sharks and man are two of them

You can also go by off-road vehicle. Here you'll be able to witness what goes on at a turtle sanctuary, such as the way the newly-laid eggs are brought to the sanctuary in Juara to protect them from birds, monitor lizards etc.

The eggs are then re-buried again within 4 hours, or else chances of survival will go down markedly. Once all eggs are buried, the site is labeled with the date and species details. 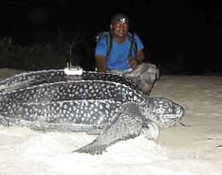 A mature leatherback turtle in Tioman

A dedicated turtle caretaker will then monitor these eggs for 40 days. When the eggs hatch, the juveniles are either allowed to take to the sea or collected and kept until they've reached a more robust size.

By allowing the turtles to grow a little larger, the amount of predation is reduced somewhat, increasing the young turtles' survival rate.

Would you like to visit or perhaps contribute to this project? Use below form for more details.